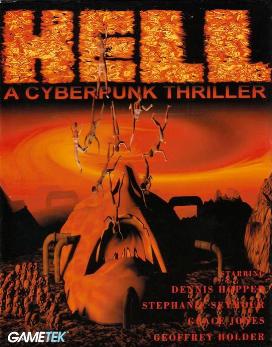 Hell: A Cyberpunk Thriller is a Point and Click Adventure Game released in 1994 by GameTek and developed by Take-Two Interactive. It was available for DOS, Mac, and 3DO. The game was notable for being one of the first CD-ROM-only games to use speech with hi-res graphics, and has been described as very similar to BloodNet. Dennis Hopper, Grace Jones, and Stephanie Seymour are among the voice actors who lend their voices to characters in the game. Seymour herself also appears on screen at one point, while Hopper and Jones appear via computer animated representations.

The story is told through a variety of partial screen FMV's. The game is set in a dystopian 2095, and the U.S. is now a brutal theocratic dictatorship called the "Hand of God." Unlike regimes of the past, this government doesn't just claim to send sinners to hell; they can prove they have done it.

In this third-person perspective environment, players pick between Gideon Eshanti and Rachel Braque, two loyal police officers (and lovers), agents of a new law enforcement agency created by the theocracy: Artificial Reality Containment, or ARC, a Cultural Revolution like organization that enforces a ban on cybernetic technology in general and Virtual Reality in particular.

The story begins one night when they find they have been declared enemies of the state and go on the run from the very government they worked for. Thus begins a quest to uncover the secrets behind the theocracy's reign of terror, one that will lead them from the corridors of power in 2095 Washington, D.C. to the very depths of Hell. Along the way they recruit allies from the criminal underworld and run errands for the demons that now populate it.