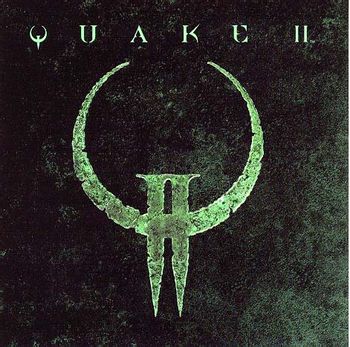 "We have cleared the interplanetary gateway between Earth and Stroggos. In exactly three hours operation Alien Overlord will commence. As I speak to you, your pods are being fueled and all systems brought online. Activate your field computers. The following Intel brief will provide you with your military objectives, terrain information, arsenal and equipment details, and enemy analysis.

Never before has there been a greater challenge to life, liberty, and civilization. This is a crusade in which we will accept nothing less than victory. No matter how long it may take us to overcome the Strogg’s barbaric assault, the people of Earth in their righteous might will win through to absolute victory. Today we will make very certain that this form of barbaric treachery shall never endanger us again. With confidence in you, and with the unbending determination of our people, we will gain the inevitable triumph — so help us God.

So go forth and kick ass, soldiers!"
— Rousing Speech from TCM Marine Commandant James in the manual.

The game was a sequel In Name Only, originally developed as an all-new original IP before having the Quake name attached to it, for better or worse. It was Id's first FPS with a real story, about Earth launching "Operation Alien Overlord," a counter-attack on the homeworld of the vicious Strogg, who were kidnapping humans for meat and body parts.

The player must go across several cities and areas of the Strogg planet in order to cause the most harm as possible. It gave the player clear tactical goals, making their way systematically through the city and shutting down the enemy's military infrastructure and its leader.

The levels in the game and the expansions are divided into several chapters, called Units. Each Unit has up to seven levels, interconnected among them, so players could go from one level to the other and viceversa, until they hit that unit's exit.

The technical improvements here were impressive at the time, with colored lighting, higher resolution, smoother graphics and bigger levels that, alongside Unreal, spurred the widespread adoption of early hardware 3D accelerators. However, in retrospect, Quake II is considered as one of id Software's more average singleplayer games, being the first game created after John Romero's departure and lacking much of the creativity that made Doom and Quake household names, in stark contrast to Romero's own Daikatana, a game that failed for the exact opposite reason. Nowadays, Quake II is much more fondly remembered for its technical advancements and engaging multiplayer mode than its singleplayer mode.

Two mission packs, which followed the same storylines as the original game, were released as well: Quake II: Ground Zero by Rogue Entertainment and Quake II: The Reckoning by Xatrix Entertainment.

Followed by Quake III: Arena. Its story was continued by the sequel Quake IV and the prequel Enemy Territory: Quake Wars.

open/close all folders
In general
Quake II (core game)
Quake II Mission Pack: The Reckoning
Quake II Mission Pack: Ground Zero
Console versions
"We hope you enjoyed the game. As a token of our appreciation for playing, we offer you this password.note FVBS LBBB 7VBC 3BGB Have fun and enjoy!"
THE END
YOU HAVE DEFEATED THE STROGG THREAT!