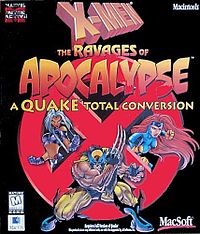 X-Men: The Ravages Of Apocalypse, developed by Zero Gravity Entertainment and released by WizardWorks Software, is a commercial total conversion of the Quake engine. Replacing the old maps and weapons are new designs, and all of the enemies in the game have been replaced with cyborg clones of popular X-Men characters, all with their own special powers—for example Archangel is immune to rockets, Wolverine has his healing factor, etc.
Advertisement:

Being a total conversion rather than a completely new game, it required the full version of Quake to be played.

The game was released as freeware in July 2006. The source code of the game was also released, but under an ambiguous license. Modifications have been made to the game to allow it to run as a standalone title.