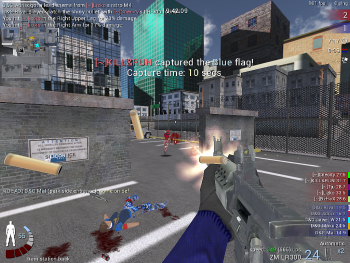 Firing LR300 on ut4_turnpike, the single most popular map in the game.
Advertisement:

, commonly abbreviated as UrT, is a freeware multiplayer First-Person Shooter. Although it started out as a total conversion mod for Quake III: Arena, since 2007 it has been de facto a standalone game thanks to ioquake3

, the open-source version of the Quake 3 engine. Its gameplay is explicitly characterized as “Hollywood realism” and “Fun over realism” by the developers, featuring more or less realistic weaponry and completely unrealistic movement. A promo video from 2009

gives a basic overview of the look and feel of the game.

Being one of the last survivors from the wave of realism mods from around the turn of the century, it’s often compared to Counter-Strike which started the craze. However, gameplay-wise it’s closer to the granddaddy of them all, Action Quake 2, and in fact many of the original developers came from the AQ2 community with the intent of recreating similar gameplay on a more modern engine. (Apparently Urban Terror got its very name from a popular map in AQ2.)

The game is still being updated after fourteen years, currently receiving bug fixes and new features every month or so. Its long-awaited next-generation version will be using Unreal Engine 4

. Urban Terror HD, as it’s called, has a dedicated subforum

No relation to The War on Terror which was still more than a year into the future when the first beta was released; the game has never featured terrorists of any kind.

Tropes found in this game are:

“Anyone need a medic?”