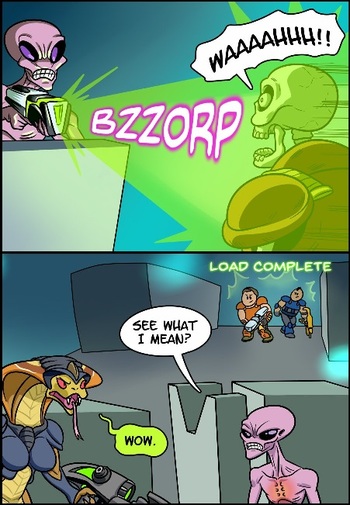 Much easier (and more tempting) to do with emulators, which often have save state features that allow the player to instantly backtrack anywhere, anytime, making the lives system pointless. This and other emulator features are used to put together or practice for "perfect" runs of pattern-based video games, especially 2D shooters. Platform Hell games are made with this in mind (with horrifying results), and Speed Run players use this to get the exact sequence of events required to make the absolute fastest time. These are called "tool-assisted speedruns", and the divide between savescummed and classic speedruns is vast. The gamers on both sides defend their position vehemently. In addition, emulator save states have one major downfall: the ability to save yourself into a corner. Without limits on when you can save, it becomes possible to save the game in situations that make the game Unwinnable, such as saving at the Game Over screen. Smarter players will use multiple saves in case this happens by accident, but a newcomer to the art of save state scumming can easily find himself trapped. Thankfully, more modern emulators often include the ability to undo the last created save state.

A Sub-Trope of Not the Intended Use and Reset Button. See also: Save-Game Limits, which attempt to curtail this, and Trial-and-Error Gameplay. Compare Brain Uploading. Autosave may be implemented to prevent this. Has nothing to do with collecting slime or saving 'scum'.

If a non-videogame example explicitly involves a Time Travel trope rather than reloading a game, see Reset Button.

The Snake Miraculous' power of Second Chance is, for all intents and purposes, a non-video game example of Save Scumming. Using it will allow for Viperion/Luka to rewind time back to that exact moment up to a maximum of five minutes. True to form, he uses this every time their battle against Desperada goes pear-shaped in one way or another. And since Viperion retains knowledge of what happens before he rewinds time, he eventually comes up with a battle-winning solution.

The Snake Miraculous' power of Second Chance is, for all intents and purposes, a non-video game example of Save Scumming. Using it will allow for Viperion/Luka to rewind time back to that exact moment up to a maximum of five minutes. True to form, he uses this every time their battle against Desperada goes pear-shaped in one way or another. And since Viperion retains knowledge of what happens before he rewinds time, he eventually comes up with a battle-winning solution.