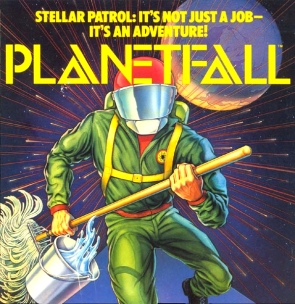 Planetfall is an Interactive Fiction game published by Infocom in 1983. It is Steve Meretzky's first game. The plot has the player crashlanding on an alien planet and exploring with the assistance of a Robot Buddy named Floyd.

It was followed in 1987 by a sequel, Stationfall, where the player must investigate a space station where all the personnel have disappeared, and the machinery seems to be malfunctioning in sinister ways.

The games are still fondly remembered for their humor and storytelling, and Floyd is commonly cited as a notable early example of a computer game NPC not made of 100% cardboard.