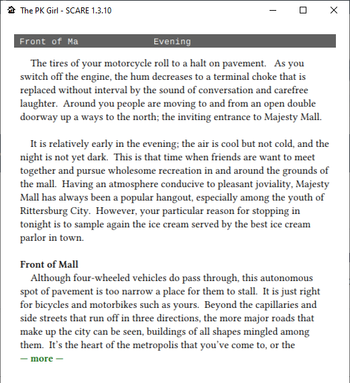 The intro.
The PK Girl is an Interactive Fiction game written by designer Robert Goodwin in 2002 on the ADRIFT engine. The protagonist is a more or less ordinary guy who sees a cute girl being kidnapped while going out for ice cream. At the urging of her sister, he gives chase to rescue her, and learns that the sisters are really psychics trying to escape from someone that wants to make use of them. During the course of the game, he encounters more lovely girls while trying to protect the psychic sisters from their oppressor.
Advertisement: