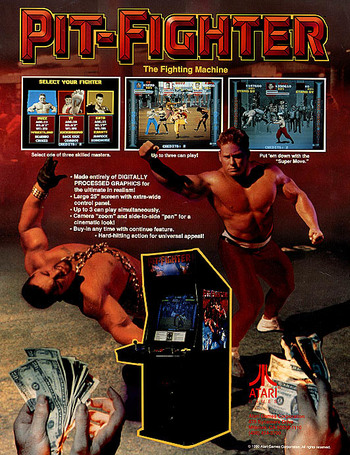 Pit-Fighter is a 1990 fighting game by Atari. It was the first fighting game to use live-action footage as the source of the character sprites, roughly two years before Mortal Kombat popularized it. There was planned to be a sequel which would have had a fourth character to play as.

Players select one of three fighters, each with their own moveset and focus. Buzz, a pro wrestler who emphasizes strength, Ty, a kickboxer who emphasizes agility and Kato, a black-belt who emphasizes speed. They then fight their way through the tournament, taking on the other fighters and trying to reach the championship fight with the Masked Warrior and defeat him.