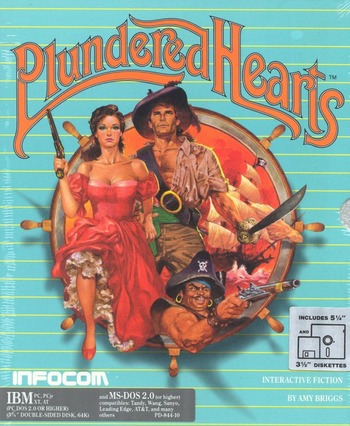 Plundered Hearts is an Interactive Fiction game, written by Amy Briggs and published by Infocom in 1987. It draws inspiration from historical romance novels and swashbuckling adventure movies.
Advertisement:

The player takes the role of Lady Dimsford, who is traveling to join her father in the Caribbean (who she believes is stricken ill by a "wasting tropical disease") when her ship is attacked by pirates. All is not as it first appears, and she is obliged to become a Damsel out of Distress and thwart the schemes of Jean Lafond, the conniving Antagonistic Governor of St. Sinistra. The romantic interest is provided by Lovable Rogue Nicholas Jamison (who goes by the Nom de Guerre of "The Falcon"), who rescues the protagonist near the beginning and goes on to need rescuing himself on multiple occasions.

This is the only professionally-published interactive fiction game to be categorized in the Romance genre, to date. The game has 54 locations that you can explore. It is also the last game for the Atari 8-Bit Computers. By 1987, Infocom no longer rated its games on difficulty level. Some fans consider the game to be equivalent to the company's "Standard" level. More info on the game can be found in this link