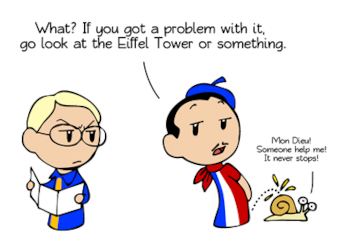 "I adore France. It's the French who ruin it."
— Jeremy Clarkson, Top Gear (UK)
Advertisement:

Putting the word Douche in "douchebag."

In popular culture, usually comedy, Frenchmen are often Acceptable Targets. They will be portrayed as villains, antagonists or someone who is just plain mean, arrogant, snobbish, bad tempered, foul mouthed or rude. Often he will talk and laugh triumphantly in a Maurice Chevalier Accent, after insulting foreigners.

These are the most common situations in which this character turns up:

This trope does not apply if the story takes place in France and the majority of the cast is French. An exception does apply if only the jerks speak with a French accent.

This is more of a Characterization Trope, unlike, say, Eagle Land or Cheese-Eating Surrender Monkeys. Compare to Evil Brit, The Mean Brit, Germanic Depressives, Rambunctious Italian and Balkan Bastard.