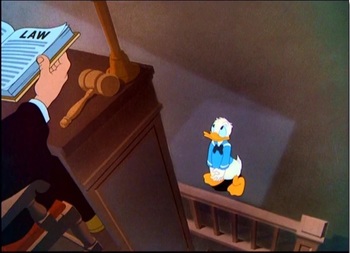 The Trial of Donald Duck is a 1948 Disney short, directed by Jack King, the last one to be directed by him.
Advertisement:

Donald Duck is out having a picnic in a park, but it starts raining, so he takes refuge in the first shelter he spots: a fancy French restaurant, and brings his picnic food in with him, which the restaurant charges him for. Unable to pay the bill, the restaurant takes Donald to court.