Theatre / The Merry Wives of Windsor 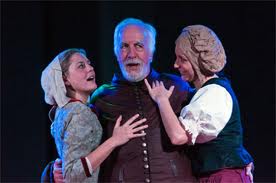 "I do begin to perceive that I am made an ass."
— Sir John Falstaff, Act II, Scene 1.
Advertisement:

A comic play by William Shakespeare.

Sir John Falstaff attempts to seduce two married ladies, Mistress Page and Mistress Ford; neither is impressed by him, and they conspire to subject him to a succession of practical jokes. A subplot concerns Mistress Page's daughter Anne, whose parents want her to marry, but can't agree on which of her suitors she should choose, while she herself prefers a man neither of her parents approves of.

Falstaff had previously appeared as a supporting character in Shakespeare's historical plays, Henry IV, Part 1 and Part 2, but here appears in what seems to be a contemporary setting.

Not one of Shakespeare's stronger efforts, the play is thought to have been commissioned for a specific occasion and written in a hurry. The characters are all stock, the A-plot and B-plot are barely even aware of each other, the exposition gets especially clunky in the build-up to the finale and it's all Strictly Formula. But Falstaff remains a joyously Unsympathetic Comedy Protagonist, and the unsuccessful suitors are two of the purest buffoons in the Shakespearean canon. With a few edits and a good cast it's a great way to kill an hour and a half. There is a persistent story that Queen Elizabeth, after seeing Henry IV, ordered Shakespeare to write a play about "Falstaff in love," but this story first appeared decades after Shakespeare's death in the writings of the dramatist John Dennis—who just happened to be promoting his own rewrite of the play at the time. (It was a flop.)

This appears to be one of the few plays for which Shakespeare came up with an original plotnote  along with Love's Labour's Lost, A Midsummer Night's Dream, and The Tempest. At least three operas have been based on the play: one with music by Otto Nicolai, one by Ralph Vaughn Williams, and one, under the title of Falstaff, by Giuseppe Verdi.

The Merry Wives of Windsor provides examples of: