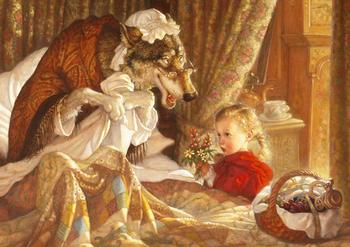 "But grandma, what a horrible disguise you have!"
Image

.
"Mr. Burns, it was naïve of you to think I'd mistake this town's most prominent 104-year-old man for one of my elementary school students."
— Principal Skinner, The Simpsons
Advertisement:

A character that the other characters should recognize (or at least recognize as out of place) dons a disguise and is treated as neither recognizable nor conspicuous. This disguise is so completely transparent that the audience wants to shout "For the love of God, it's him!"

The external reason for the flimsy disguise may be that the creators want to signal the presence of a disguise to the audience before the other characters catch on (a sort of Reverse Whodunnit). Sometimes, the character may also be a Special Guest the director wants to get their money out of. All the same, you often get The Reveal staged in such a way to make it clear that the director really thought you wouldn't have worked it out by now. For the more perceptive viewers, it's a case of The Un-Twist.

While not a Dead Horse Trope, these days Paper Thin Disguises are parodied as often as they are used seriously. Many Stock Parody Jokes involve a person appearing who coincidentally looks just like the person wearing a bad disguise, usually seen in cartoons. The trope is still an important dramatic convention in live theater and opera productions — where a really good disguise would render the character unidentifiable from the cheap seats, and be beyond the scope of the prop budget to boot — but is usually employed along with some kind of nod to audience acknowledging the absurdity. This can sometimes be exaggerated for comedic effect, for example wearing bunny ears and becoming indistinguishable from a real rabbit, or pretending to be an ancient statue by simply standing still in a specific pose. Children's shows still employ this trope regularly without any parody element.

Common selections include hooded coats or cloaks thrown on over the character's standard outfit, which can be played seriously, or the classical Groucho Marx glasses-and-mustache prop, which never is. A fake handlebar mustache is also a very common pick for the more comedic takes. Some consider a pair of glasses or sunglasses Paper Thin Disguise, but research showed that it is rather useful to mess with people who don't really know you well. (Research is done by showing pictures of people with and without glasses and asking others to recognize them, and people got a pretty bad score in glasses while worse with sunglasses.)

Sometimes, the trope is present when someone is mistaken for someone else, but it isn't an intentional disguise, it's just someone that appeared for no reason and is not trying a disguise, but has slight similarities that are enough to fool someone unintentionally.

It's becoming a bit common nowadays to subvert this trope by fooling the viewers instead, showing what seems to be a terrible disguise, but then it's revealed that it isn't, you thought that Bob was badly disguised as an old man, but then Bob in regular clothes appears next to that old man that looks like him.

Match and Bubble put Gelatin on top of themselves to disguise themselves as trees to avoid being seen as disqualified contestants. Firey Speaker Box doesn't buy into it again now that the challenge is over and they don't have Gelatin with them.

Do I Hear a Ralts?

Match and Bubble put Gelatin on top of themselves to disguise themselves as trees to avoid being seen as disqualified contestants. Firey Speaker Box doesn't buy into it again now that the challenge is over and they don't have Gelatin with them.

Do I Hear a Ralts?