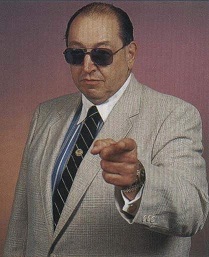 "WILL YOU STOP?"
"And you know the Pearly Gates in Heaven? It's now gonna be called 'The Gorilla Position.' Goodbye, my friend."
—Bobby Heenan, WCW Monday Nitro, October 11, 1999

Robert James "Gino" Marella (June 4, 1937 – October 6, 1999) was an American amateur and professional wrestler, announcer and executive from New York City best known for his work for the WWWF/WWF from the 1960s to the 1990s as Gorilla Monsoon. He competed primarily for the then-WWF, but also for the World Wrestling Council in Puerto Rico, for the WWA promotion in Los Angeles, for Maple Leaf Wrestling

in Toronto, for the National Wrestling Alliance territories in Hawai'i, Montreal and St. Louis, and for the World Championship Wrestling promotion in Australia

(not to be confused with WCW). He was a 2x WWWF United States Tag Team Champion

. After retiring from in-ring competition, he spent many years as a broadcaster on WWF TV and PPVs, often with Jesse Ventura or Bobby Heenan on commentary, and worked in the office and as the President of the WWF after Vince McMahon had cut ties with the Tunneys, who were the main promoters in the Toronto area for decades. Monsoon was inducted into the WWE Hall of Fame in 1994. His last public appearance was as a judge for the "Brawl for All" fight between Butterbean and Bart Gunn at WrestleMania XV , which Butterbean won in 35 seconds. He passed away from heart failure on October 6th, 1999.

"These tropes are literally hanging from the rafters here at the Garden":