Podcast / The John Dredge Nothing To Do With Anything Show 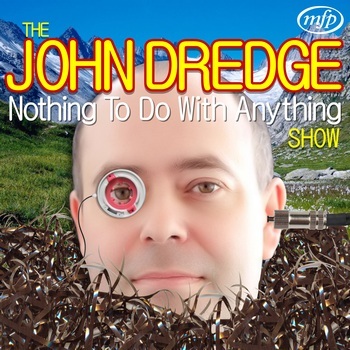 Unfold your ear trumpets, deactivatatronalise and assume an auditory listening position of your choice.
Advertisement:

The John Dredge Nothing To Do With Anything Show is a comedy podcast by British comedian John Dredge. It gradually evolved out of a number of different approximately five-minutes-long programmes which were originally published on Comedy 365 and are now mostly archived on the 404 Funny

). Many of the show's regular characters first appeared in one of those predecessor programmes.

After a special half-hour-long Christmas Episode in 2011 - called appropriately The John Dredge Nothing to Do with Xmas Show - the first official episode of the Nothing To Do With Anything Show was published in May 2012. Since then, four series, each featuring six episodes, have been produced with the help of producer Richard Cray. A number of other comedians and actors have had recurring appearances in the show as well, including Anna Emerson, Greg Haiste, James Shakeshaft, Max Dowler, Will Franken, Anil Desai, Miles Eady, Katy Slater, Mark Davison and a lemon meringue pie.

The show is available for download on the British Comedy Guide

and it has also been broadcast on radio on some independent radio stations in the London area. Some additional written material is available on John Dredge's blog

The show can best be described as surreal Sketch Comedy with lots of audio phonic weirdness, similar to The Goon Show, Kenny Everett's work or The Burkiss Way. It also features a number of recurring characters and Shows Within a Show, the latter usually appearing once per series.

The Nothing To Do With Anything Show and its predecessors contain examples of: