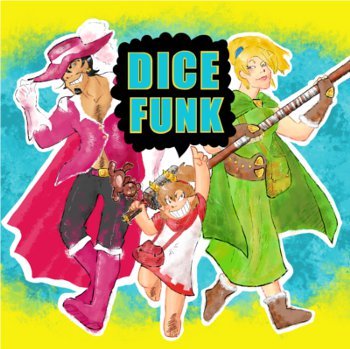 "I'll put the 3 in Intelligence. What's the worst that could happen?"
“You might be under the false impression that you are about to listen to a Dungeons & Dragons podcast, but in fact, you're listening to something that's much more. It's an adventure of - hopefully - high comedy, high drama, and low taste. Welcome to Dice Funk.”
— Michael "Skitch" Schiciano
"What would an ad for this show even sound like? 'Come listen to a video game critic pretend to be a lesbian elf!' Actually, there's probably a market for that..."
— Austin Yorski
Advertisement:

Dice Funk is a Dungeons & Dragons podcast that spun off of Word Funk. It is equal parts audio drama and improv comedy, with most of the players being professional film or video game critics. While nominally operating on 5th Edition rules, the focus is much more on characterization and storytelling. The show is split into distinct "Seasons," each featuring a new storyline, players, and characters.

Main Seasons
Season 1, "Stoneroot," is noir-inflected black comedy about a con man, a moronic cleric, and a shapeshifter who accept a seemingly straightforward missing person's case and end up making a mess of cosmic proportions.

Season 2, "Lorelei," is a swashbuckling adventure conceived of as a cross between The Princess Bride and The Legend of Zelda: The Wind Waker. It features a much lighter tone than the first, a more improvisational DM, as well as a cast of largely non-humans. Our interplanar ensemble of fresh-faced adventurers seeks to uncover the reason behind the world flooding and put a stop to it if they can.

Season 3, "Ilium," is a mystery surrounding a small town where one can enter but never leave, inspired by the likes of Twin Peaks or Hot Fuzz, and the first season with characters starting at a higher level. It features a crew of bounty hunters called the Avant Guards attempting to bring order to the hive of scum and villainy they live in while uncovering its secrets.

Season 4, "Valentine", is an Urban Fantasy story surrounding four internet acquaintances scrounging to make rent. It is named after the Valentine desert it takes place in, and set after a cataclysmic event which led to the development of modern to near-future technology and all-powerful corporations. The story is split between a North Valentine City above ground and a South Valentine City underground, populated by Warforged exiles and reptilian species.

Season 5, "Markov," is set in space, and meant to have a lighter tone than Valentine, which one should take to mean that there will be only a few mutilations and existential crises. The party travels from planet to planet, taking jobs while piecing together and fighting against an overarching plot to destroy the universe.

Season 6, "Purgatory," is set in an alternate Planescape setting. It centers around a team of resurrected mortals who have taken the mantle of the Furies, assassins sent to maintain the balance of power between planes by killing or depowering god-like entities.

Season 7, "Wormwood", is set in an alternate Dark Sun setting and its apocalyptic nature is the eventual result of what happened during Season 6.

Season 8, "Grendel", is about the watchmen of a friendly village at the foot of the tallest mountain, frequented by travellers attempting to reach the portal at its peak.

One-Shots and Side Series

The "Shardpoint" series of one-shots are set just after Season 3, and are named after the Shardpoint Academy, an adventuring school with a shifty new headmaster. In order to kill five birds with one stone, the headmaster sends a group of students and teachers to retrieve a book from the library. The book turns out to contain locations for numerous enchanted artifacts; each one-shot is based around finding one such artifact.

Initially a sports-themed one-shot based around Rallyball, a contact sport with a mix of gladiatorial combat and ball-in-goal point scoring. It's not necessarily set in the Dice Funk universe, but rather a parallel world where the only difference is the existence of Rallyball. Turns into a murder mystery by the end of the first episode, and it's implied that every episode could be a different genre.

A Halloween-themed one-shot wherein a trio of high rollers visit the titular upside-down casino, Mr. Spooky's House of Fun, staffed by talking animals with a variety of accents. The gamblers are invited into the 'Winner's Room' where higher-stakes games are run.

Three Octopuses in a Trench Coat

Using the one-page RPG also titled Three Octopuses in a Trench Coat, a trio of octopi attempt to escape the laboratory they're being held in.

Set in the Dice Funk universe after the death of the gods. Before her demise, Mystra shattered her essence and scattered her power to various mortals known as Inheritors, granting them great powers that manifest during their teenage years. So it's a Magical Girl one-shot.

A sort of mini-season put together to make up for delays in producing Season 7. A legal mystery based on the likes of Phoenix Wright, it centers on the law firm of Guns, Puns, and Justice as they attempt to prove their client's innocence in a murder investigation.

A morally questionable team of assassins is hired by Mayor Richman to Kill Frosty, a giant fleshy snowman who has been wreaking havoc on the town in general and Gorbo's business in particular.

Because the Credits got too long to leave in each episode, the credit section has spun off into its own monthly show. Lauren and Joa read off the Patreon supporters and make jokes.
The show is available on iTunes