Just Before the End 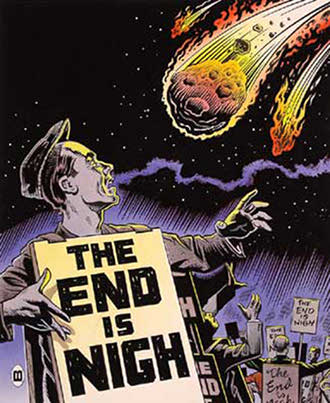 It's all downhill from here.
"Last one to die — please turn out the light."
— Graffiti on poster in Children of Men
Advertisement:

It's probably sometime between Next Sunday A.D. and 20 Minutes into the Future, but it could also be another planet in a distant galaxy in an inverted universe. All that really matters is that the world, or civilization anyway, is ending... any day now. The zombie army is making its way across the continent... oh so slowly. The worldwide economic crash is in its 10-year stretch. The global powers are arming for all-out war, The Virus's death toll is rising, and the asteroid named Malthus Prime is on its way to end the human race... in exactly X.5 months, Y days and Z hours.

The world you're in probably resembles a Crapsack World verging on a Scavenger World. The trains are still running, though probably not on time. Everywhere it's ominously hinted that however bad the present is, the future will only get worse, and by the end, or at least by the next sequel, it has, and we get to see what things are like After the End. Just Before the End is usually a bleak dystopia (or alternatively, a facsimile of the modern era) that is coming apart at the seams. Expect to see people Dying Like Animals. Graffiti and abandoned cars are usually a given. The Depopulation Bomb may have already dropped, leaving a Crapsack World or worse, but if it hasn't dropped yet, it's on its way... oh yeah, it's coming. Better get your $99 bottled water and your car batteries while they last, folks! Right here, at Joe's Apocalyptic Emporium! Alternatively, you might want to invest in a suicide kit: Thank God for State-Sponsored Euthanasia!

As many of the examples show, Just Before The End can either take place just before the impact of a Depopulation Bomb or after its impact, provided the effects of said Depopulation Bomb are not immediate: for example, if an asteroid crashed ten years ago but was only large enough to destroy a few cities at most, but it brought with it a deadly contagion which has reduced the world's population drastically in those ten years to the point that the contagion is daily news and everyone's expecting to die, then you've also got Just Before The End set in a Crapsack World.

Also known in apocalyptic literature as the Dying Earth subgenre. You can expect anyone previously chanting that The End Is Nigh to gloat about being right... but not for very long. Compare The Cretaceous Is Always Doomed, this trope's Time Travel counterpart.

Compare Signs of the End Times. Not to Be Confused with Dénouement or Before the Dark Times.