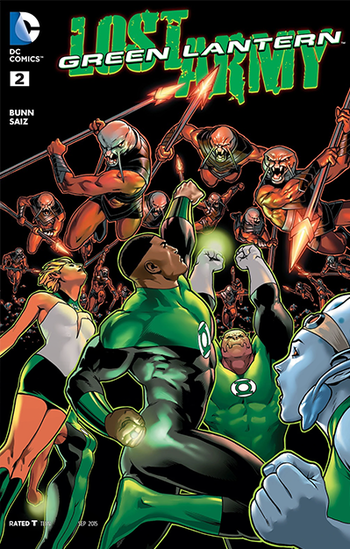 Green Lantern: The Lost Army is a six issue DC Comics Green Lantern miniseries written by Cullen Bunn with art primarily by Jesús Saíz that was published from 2015 to 2016.
Advertisement:

A contingent of Green Lanterns consisting of Arisia Rrab, John Stewart, Kilowog, Two-Six and Xrill-Vrex find themselves stranded in a hostile sector of space which none of them nor their rings can identify. With the troubling complication that their rings can't locate the central power battery to help them to find their way and the fact that one of their most dangerous foes is along and seems not only friendly, but not to have any recollection of the Lantern Corps whatsoever. Their search for other members of the Corps leads them to a group of Lanterns who fell in battle against the locals. When Stewart's contingent of Lanterns is attacked once more they're saved by the timely appearance of Guy Gardner, who has even less a clue of what's going on than they.