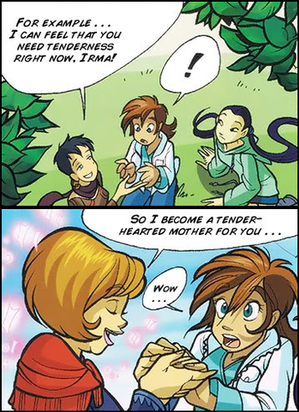 Sometimes The Mind Is a Plaything of the Body when you've transformed into something else. Well, sometimes the body is the plaything of the mind. Or the world.

There are some characters whose physical form is involuntarily dictated by their environment, or the people around them. Sometimes this is useful; perhaps the character can instantly adapt to new environments. More often, this can be a pretty serious case of Blessed with Suck: you can transform, but you'll only turn into whatever other people think of you. Which wouldn't be a bad thing if you're hanging out with your close friends, but even Cthulhu shudders to think about what will happen should you be, say, very promiscuous.

Empathic shapeshifters very often have some form of Adaptive Ability as well.

See also Clap Your Hands If You Believe and Something for Everyone.

Can overlap with A Form You Are Comfortable With and You Cannot Grasp the True Form, if the taken form is merely whatever the person looking wants to see. When somebody changes in response to their own emotions, that's Living Mood Ring.