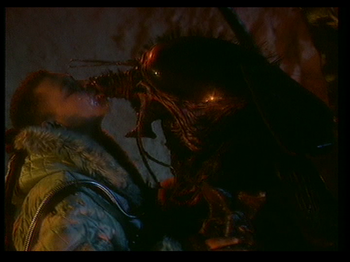 A badly disheveled Lister awakens on Starbug, and finds he's got a touch of total amnesia. After a few minutes stumbling about, he's met by Kryten, who explains the amnesia is a side-effect of two hundred years in stasis (Kryten had tried to wake him up in the spring, but he absolutely insisted on another three months). Kryten quickly tries filling Lister in on himself; his fondness for vindaloo, his snobbiness, his desire to find and then have sex with Kochanski, and his "ability" to play the guitar. Lister isn't remotely impressed at his being a "barely human grossed-out slimeball". The reactivation of Rimmer at least kick-starts some of his memories.

Soon enough, the Cat's up too, and Lister is well on his way to recovery, enjoying a nice bowl of Corn Flakes (with grated raw onion) with a little tabasco sauce for extra pep, and convinced he can play the guitar. Rimmer tries to get down to business: What's happened to Red Dwarf, which they've lost, for which he blames Lister forgetting where he parked it. Kryten fills him in: They didn't lose the Dwarf, it was stolen. They've been in stasis because Starbug couldn't keep up, but now it's had to make a massive detour around an asteroid field that the Bug doesn't, giving them a chance to head it off.

Of course, since this is Red Dwarf, it's not so easy. After blowing up an asteroid with their newly designed weaponized garbage disposal unit, they discover the asteroid field is filled with dozens of crashed ships. Examining one finds a warning scrawled in blood (and a lower intestine): PSIRENS. They're GELFs that use psychic mirages to lure unsuspecting saps onto asteroids and suck their brains out, the scrawled message being an attempt at warning anyone from falling into the same trap.

Still, Rimmer reasons they're probably safe, since between the four of them there's barely a snack on-board. They continue onward, quickly receiving a distress call from a colony of attractive, lustful women in need of men to "spread their seed". The Cat nearly falls for this, but they continue on. Then they get a call from a crashed ship, under attack from Psirens... with Kochanski on-board. And she's got children. Lister's, in fact, thanks to breaking into the sperm bank on Red Dwarf. Before Lister can go charging in, Rimmer points out it's an obvious trick.

Fortunately, Starbug is tough enough to survive the impact and the crash-landing. The only problem is the landing gear gets buried in rock, forcing Lister to go outside to fix it. The same outside filled with ravenous Psirens after his grey matter. The first tries appearing as his teenaged crush, and almost succeeds until another Psiren pretending to be Kryten saves him. Narrowly avoiding it and another Psiren pretending to be a TV weather girl, Lister makes his way back to the 'bug... as does Lister. Now there's two of them, and they can't leave one behind. On the other hand, if they do, they'll definitely have a Psiren on-board.

With no options left, Kryten lets the second Lister in. Soon, both Listers are asked to prove who they are. Trimming their toenails doesn't work since the Psiren can match Lister in disgusting detail. They have to go nuclear: Someone has to play the guitar. The first Lister does so, effortlessly playing an amazing guitar riff... at which point Kryten and the Cat blow him away. The Psiren picked up on Lister's belief of how he could play, rather than the "talentless ten-toed, tone-deaf noise polluter" he actually is.

Lister's outrage over this allows the Psiren to limp away, and everyone goes hunting for it, in the dark recesses of the ship. Rimmer quickly steps out of the picture when his battery runs low, and then Cat and Lister go heading back to the cockpit following an alarm from the readout. Kryten, alone, finds the Psiren. No problem, then, since his brain is synthetic, and he has no lusts or desires for it to exploit. Unless, that is, the Psiren takes the form of his creator, Dr. Mamet, who he's programmed to obey. Even if said order is to climb inside the waster disposal unit and use it to crush himself. Lister and the Cat return, the sensor read out turning out to be another illusion, and take a break at a convenient vending machine. Which wasn't there before.

The Psiren knocks them out and prepares to suck on their brains, when Kryten - now crushed to a cube and almost annoyed - returns, and drops on it from the upper railing, slaying the beast. In the aftermath, Starbug escapes the belt unscathed, ready to catch up on the Dwarf, and all is well. Except Kryten can't get around to fixing himself while there's still laundry that needs doing.