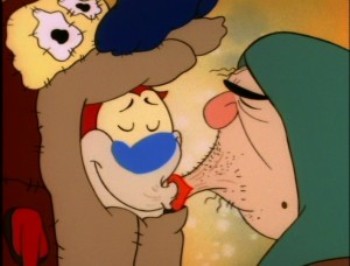 "Russia! Our women look like men!"
— Ryan Stiles, Whose Line Is It Anyway?

As with most stereotypes about people it's difficult to find out where these images came from, although Baba Yaga, the Wicked Witch from Slavic Mythology, is an example from within the culture itself right down to her headscarf. What is certain for a fact is that the "ugly Eastern European woman" stereotype became more prevalent after The Russian Revolution came in effect. Soviet propaganda always showed a lot of muscle strong women working in the fields alongside the men as their "comrade-in-arms". As fashion was considered bourgeois in Soviet society the industry in this field was fairly limited, resulting in domination of purely functional, often very ugly and shabby clothes designs. This also fit propaganda purposes, as it showed that everybody was equal. In the West, where the Red Scare was strong, these strong Russian women were seen as a threat or something laughably repulsive. Most Western women were still expected to be housewives and even those who did work for a living were not particularly encouraged when doing so. Apart from that the muscular Russian women looked like bitchy manwives in most Western males' eyes. Western Red Scare propaganda also did a lot to hammer this image in people's minds and became more and more prevalent at the height of the Cold War. Especially in the USA, TV sitcoms, films and stand-up comedians liked to crack jokes about hideous Russian women.

The image may also be due to the main way the West got exposure to Russian women — from sports, particularly the Olympics. Russian women are either svelte gymnasts and tennis players or horrible shot putters. (Rumors that the Soviet Union secretly juiced their female athletes with steroids might have also had an effect.)

This is largely a Forgotten Trope after the end of the Cold War, though old Slavic ladies (whether one finds them ugly or just charming) still pop up in tourist brochures. Nowadays it's mostly been replaced by the Sensual Slavs portrayal, which in the Cold War tended to only pop in When Harry Met Svetlana spy stories with the beautiful Slavic woman being an obvious state agent compared to her uglier cousins.