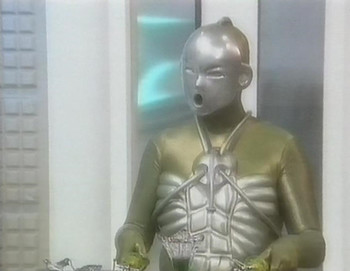 I insist you stay here with me. You will be my honoured guests - from now until the day you die.
Rimmer: Step up to Red Alert!
Kryten: Sir, are you absolutely sure? It does mean changing the bulb.

In their pursuit of Red Dwarf and with supplies running low, the boys come across an old space station that registers no lifeforms until they board. Then they are greeted by an elegant masked man who calls himself Legion. Legion proves his worth when he does a painless appendectomy on Lister and then upgrades Rimmer's lightbee, without apparent effort, and treats them to a feast.

The Dwarfers decide that they've got to have him on their crew, but when they propose that he join them, Legion says it's quite the reverse: they are going to stay with him until they die. Kryten realizes that Legion is a gestalt created millions of years ago by researchers. He was once a combination of the most brilliant minds in history. Now he... isn't... but without the Dwarfers, he will cease to exist.

Though he provides them all with every luxury they could imagine—even down to a disgusting filthy bedroom with a mop and bucket for Kryten—the boys decide they have to go. Unfortunately, Legion in his present form is quite capable of being irrational and deranged, and demonstrates that if he harms himself it will rebound on them. Kryten soon hatches a plan, however. He knocks everyone else unconscious, reducing Legion to a copy of himself. And as a mechanoid, Legion is now bound to assist his human masters. Legion-as-Kryten admits to a feeling of relief as he helps Kryten carry the others back to Starbug, given how neurotic they all are.

Legion also provides them with a new stardrive. Kryten insists on optimism and gets everyone to chant that they believe it will work. And when they switch it on, it does work—by blasting out of the hull and zooming off into space.