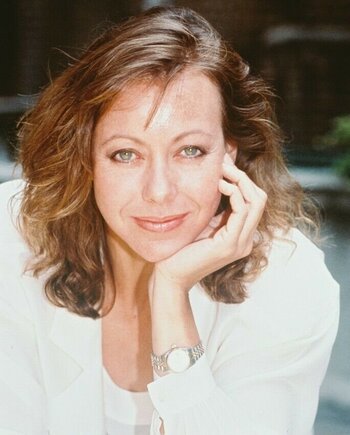 Jennifer Ann "Jenny" Agutter, OBE (born 20 December 1952 in Taunton, England) is an English actress best known as Jessica 6 in Logan's Run, Roberta "Bobbie" Waterbury in The Railway Children, and Alex Price in An American Werewolf in London. Currently she stars as the spirited, saintly nun-in-charge Sister Julienne on The BBC smash hit series Call the Midwife.

Agutter began her career at age 12 in East of Sudan and subsequently appeared in The Snow Goose, The Newcomers, Walkabout, and in an iconic turn as "Bobbie" Waterbury in both the TV and film incarnations of The Railway Children.

After a stint with the Royal National Theatre — where she worked with John Gielgud, who, she says, truly taught her the craft of acting

— she left for Los Angeles at 21 and remained there for over a decade, appearing in, among others, The Man In The Iron Mask, The Eagle Has Landed, An American Werewolf in London, Logan's Run, and Equus, the last of which won her a BAFTA for Best Supporting Actress.

Werewolf and Logan's Run cemented her status as an iconic sex symbol of the '70s, where she was arguably very much the time's equivalent of Keira Knightley; a petite posh British woman who gets her clothes off a lot. This has definitely not diminished over the years

Tired of Hollywood, Agutter returned to England, playing the title role in Hedda Gabler at the Roundhouse Theatre in 1980 and spending the 1982-83 season with the Royal Shakespeare Company. Throughout the the 1980s she made sporadic appearances on film and television, including Love's Labour's Lost as Rosaline and Magnum, P.I. as Krista Villeroch.

Unfortunately, an acting career that began at twelve took its toll on Agutter. "If being adult is knowing who you are then that was put off well into my thirties," she noted. Fortunately, marriage (to Johan Tham, a Swedish hotelier), motherhood, and cutting back on her workload in the 1990s to raise her son allowed her the time she needed to finally mature.

She did continue to appear on television, radio, and the odd film, including playing stressed politician's wife Connie Spencer in And The Beat Goes On and Tessa Phillips in Spooks. In 2000, she made a dramatic and heartwarming return to The Railway Children in ITV's telefilm of the novel, this time playing the mother opposite Jemima Rooper as a worthy successor to Agutter's iconic Bobbie. In 2022, she returned to the role of Bobbie in The Railway Children Return.

A tremendous self-esteem boost in her 30s led to a far more candid Jenny Agutter; though always genuinely warm, sweet, and down-to-earth, these days she is willing to allow her grumps and flaws to show. Funny enough, with this came far more control over her career; she is far choosier now about her roles than she was early on, spends more time with her family, and in 1997 finally felt confident enough to return to the National Theatre after nearly a quarter-century as Mrs Darling in Peter Pan.

Most recently she appeared as a shadowy member of the World Security Council in the 2012 box office smash The Avengers (2012), a role she reprised in 2014's Captain America: The Winter Soldier. Meanwhile, she is also playing a lead role in Call the Midwife, the BBC's biggest hit in ten years, as the devout, lively nun-in-charge Sister Julienne, head midwife of Nonnatus House; the drama has been a surprise ratings smash and will likely run for several more years.

Agutter currently lives in Camberwell, South London, with her husband and son; the family also own a second home in Cornwall.