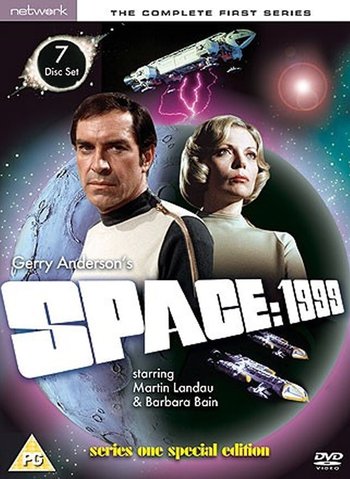 "We are Mankind. We came from planet Earth, and we built this base, called Alpha, to learn more about space. But human error blasted this Moon out of the Earth's orbit. And so, we have travelled the Universe searching for a place to live."
— Prof. Victor Bergman
Advertisement:

This British TV series was created by husband-and-wife team Gerry Anderson and Sylvia Anderson, the creators of Thunderbirds and other "Supermarionation" fare as well as UFO, and was produced by Lew Grade's ITC Entertainment (in co-production with Italy's RAI during the first season, explaining the presence of Italian guest stars). It originally aired in the UK between 1975 and 1977, although several season one episodes were premiered in the US (like "Another Time, Another Place") and Australia (like "Ring Around The Moon").

Its premise was simple: on September 13th 1999, a ridiculously smallnote that is, small compared to what would really be needed to move the moon - it's huge by human standards explosion blows the moon out of its orbit and accelerates it to a velocity sufficient to send it hurtling out of the solar system and travelling interstellar distances in improbably short times.

During this catastrophic event, the 300 persons crewing Moonbase Alpha avoid getting smeared into jelly; once things settle down a bit, they make the best of bad situation by surviving for at least three years with no means of support. They also deal with all the usual skiffy hackery — aliens, monsters, mysterious events, the works — without much thought to any serious science (or, often, common sense) in the resulting plots.

The show starred Martin Landau as Commander Koenig, the commander of the moon base, and Barbara Bain as Dr. Russel, its chief medical officer. It consisted of two seasons, each with a different approach; season one was relatively slow-paced and cerebral, touching on existential and philosophical questions, whereas season two had more of an action-oriented Monster of the Week approach.

The massive production cost of the show meant that a network sale in the USA was more-or-less essential. Lew Grade, the head of ITC, pulled defeat from the jaws of victory by raising the asking price at the last minute in negotiations with a previously enthusiastic NBC, who called his bluff and passed. On learning of this, CBS and ABC also declined to buy it, and Grade was forced to sell it into syndication. Regardless, the ratings were successful enough that ITC commissioned a second season, with the provisos that there should be an American producer and the budget should be cut. This led to the massive Retool between seasons. The second season was also popular enough that a third almost happened.

A fan-produced featurette, "Message from Moonbase Alpha" (written by regular series writer Johnny Byrne, starring Zienia Merton as series regular Sandra Benes, using footage from the series and done with permission of the copyright holders, therefore almost being canonical) eventually established that the Moonbase crew found an Earth-like planet to live on.