Discovering Your Own Dead Body 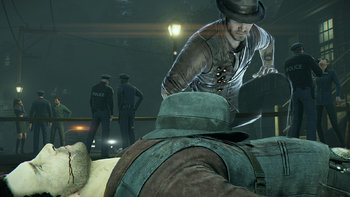 When a character turns out to be Dead All Along, they often only realize this upon finding their own corpse. Whether they're actually a ghost, have been cloned, time traveled to the future past the time of their death, gone to an alternate dimension or have since become a robot, the discovery is shocking and traumatizing for a character who was unaware they had actually died. If none of the above applies, and the character is indisputably alive, then it's usually an indication that the character is destined to travel to the past at some point and die there. Almost always results in a Heroic BSoD from the character in question, and often overlaps with Tomato in the Mirror.
Advertisement:

The state of the body can be anywhere between "can be mistaken for alive but sleeping" and "skeleton with the clothes still on" but are always recognizable as being their own. Often a body found in such a state is still exactly where the person died, to indicate they were never found. For extra pathos it may even be stuffed and mounted to indicate a severe lack of respect for the deceased.

Attending Your Own Funeral may overlap if The Reveal occurs at a character's own memorial service. A more benign version may involve a Psychopomp arriving to spirit off someone's soul and the recently deceased taking one final look at their discarded body. The more supernatural versions of Prematurely Marked Grave may also be related.

Naturally, as both a Death Trope and frequent Ending Trope the following examples contain unmarked spoilers.