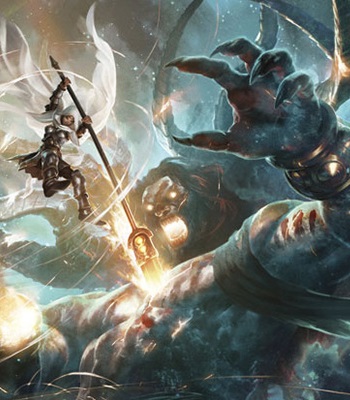 "It is done." Elspeth kills

the God of Revels.
"The humans think us immortal. Should we test that?"
— Loki to Thor (before dropping him out of a helicarrier), The Avengers
Advertisement:

To kill the gods/God/Crystal Dragon Jesus is a daunting task. You're often dealing with an Immortal, Nigh-Invulnerable, Physical God that can probably snuff the life out of you in an instant.

However, in fiction, you may have a setting where you can Kill the Gods. This makes sense if the character who kills the god is its equal or greater in power, although it's not unheard of to see someone who's weaker than the god kill them anyway.

If the Gods Need Prayer Badly, this could be accomplished by everybody ceasing worship at once (or, in a setting with multiple gods and/or religions, slaughtering the god's followers) and letting the god just shrivel up. The more direct method may need acquiring an Immortal Breaker weapon.

Make sure, by the way, that you are killing the entire god, and not just a projection of the God in Human Form. Otherwise this is Fighting a Shadow.

Of course, once you do this, the God is Dead, with possible consequences aplenty. See also Rage Against the Heavens. Compare Did You Just Punch Out Cthulhu?, which their cause of death qualifies for if the god-killer is a mortal or otherwise much less powerful than the god that was killed. A warning for those warrior nay-sayers; in a setting where there are multiple gods, slaying one of them is a powerful indicator of the threat posed to them, and may result in some pre-emptive retribution for their own safety (and possibly to punish the arrogance of mortals who act outside their perceived place).

See The Death of Death if someone takes down The Grim Reaper. When it involves eating the god during/afterwards the kill or inflicting a Fate Worse than Death, see God-Eating.

Do not confuse with Creator Killer.

Asura kills the god of mantra and Gaea Chakravartin, saving the planet and his daughter at the cost of his life.

Asura kills the god of mantra and Gaea Chakravartin, saving the planet and his daughter at the cost of his life.