The one that nearly ended it all. 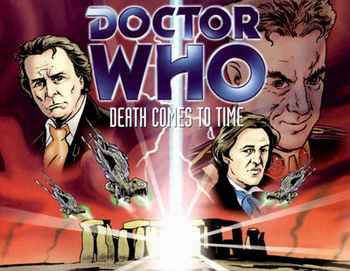 In one reality, the journey ends with an unlucky Seven.
Advertisement:

A Doctor Who webcast, which serves as a potential finale for Doctor Who. It was broadcast in 2001 and also released as an audio drama. It features The Seventh Doctor, Ace, and The Brigadier.

Death Comes to Time was intended to lead into a new series following Time Lord the Minister of Chance, voiced by Stephen Fry. A longer The Minister of Chance series was finally released in 2013, but with a new Minister. Both of these are largely regarded as an Alternate Continuity by the fandom and the official sources alike, though it gives one explanation of why the 7th Doctor in the TV Movie is travelling alone.

It is also notable for revealing that "Time Lord" is not just some fancy moniker- here, the race actually possesses the power to be lords of time. But because these are story-breaking powers, this is why this is only seen at the prospective end of the series.

A small minority seem to still consider this the end of Doctor Who, with the TV Movie and revived series as Fanon Discontinuity.