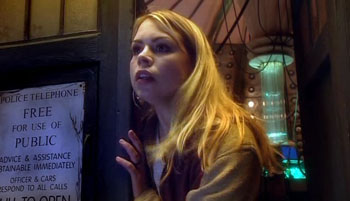 ...aaand we're back, after an intermission the size of several Bibles!
The Doctor: I'm the Doctor, by the way. What's your name?
Rose Tyler: Rose.
The Doctor: Nice to meet you, Rose. Run for your life!
Advertisement:

The one where it all began — erm, continued — again.

Written by Russell T Davies, this story is perhaps the most significant episode of Doctor Who since the very first one back in 1963, owing to the titanic hiatus that preceded it. The show hadn't aired a single new episode since the TV movie in 1996 and hadn't actually been a television show since being cancelled upon the conclusion of "Survival" in December 1989, over fifteen years prior. Meanwhile, public memory on Doctor Who had grown heavily stereotyped against its favour over the decades, with the general public remembering the show as a camp and narm-heavy affair full of dodgy sets, strange music and monsters made of bubble wrap and tin foil. As a result, this story not only had to live up to the expectations of fans who'd been waiting for Doctor Who to be Un-Cancelled since Margaret Thatcher was still prime minister, but it also had to crush persistent negative perceptions of the 1963-1989 series and prove that Doctor Who could be relevant for and appealing to the new millennium.

With that, we have the very first story of what is now dubbed the revival series of Doctor Who; everything before this point is considered the classic series.

Meet everygirl Rose Tyler, played by Billie Piper: she has an overprotective mum , a dead dad, a nice but aimless boyfriend, and a dead-end job in a department store. In short, This Loser Is You, only probably a bit prettier.

One evening, after her workplace closes, Rose is asked to hand lottery money to the chief electrician. Unable to find him, she gets mysteriously locked in a room full of mannequins, which hang around being creepy and then attack. Rose is backed up to a wall, facing death-by-mannequin, when her hand is grabbed by a stranger who yells "RUN!" and we're into the first chase of the new series.note Yes, for anyone wondering, the revival series is a continuation of the classic series, not a reboot. This would later be made explicit in the show itself the following season.

It ends sort of abruptly when the pair make it into a lift, followed so closely by a mannequin that the stranger (the Doctor; it's not like no-one saw it coming) can pull one of its plastic arms off. Rose's reasoning skills impress the Doctor enough that he asks for her name, introduces himself, and advises Rose to run like hell before the bomb he's going to plant goes off.

Rose happily obliges. The Doctor, on the other hand, does exactly what he does best and makes stuff go boom: the building goes up in flames and Rose is out of a job and thoroughly confused. She goes back home while passing a strange blue phone box, where her mum Jackie is enjoying the excitement perhaps a little too much: phoning everyone, assuring them she's still alive, and trying to get Rose interviews, preferably well-paid ones. Rose is understandably angry. Boyfriend Mickey turns up and tries to take his almost-dead girlfriend out to the pub, ostensibly to comfort her, but really so he can watch football. Rose asks him to get rid of the arm. Mickey chucks it in some random bin and calls it a night. It's not really his fault — it's only the series premiere, so he hasn't learned that random alien weirdness that turns out to be hostile should be stomped into bits, set on fire, and the ashes stomped into bits just in case.

Next morning, Rose is jobless, which is why she's home when the Doctor — having traced the plastic arm to her flat — turns up. The Doctor examines himself in the mirror for what is apparently the first time, talks to Rose and gets attacked by the plastic arm, which, having re-entered the flat in the night, was hiding behind the sofa. Rose thinks he's kidding around with the arm, until it flies off him, redirects towards her in midair and tries to kill her. Rose and the Doctor escape after the Doctor defeats the arm and start contemplating their navels. Apparently, the plastic people want to take over the world. They make puns. The Doctor leaves in the TARDIS, a.k.a. the "mysterious blue box"; the new audience, like Rose, is not meant to know what it is just yet.

Rose goes to Mickey's house and hops on the Internet. With quite possibly the worst Google-fu seen in modern TV history (starting with the word "Doctor" and looking surprised when totally-not-Google

gives her actual medical doctors), she tries to find information and eventually stumbles across some random conspiracy-theory website run by some random guy.note Ironically, in the real world, typing "Doctor" in Google gives relevant results right away, starting with the second link. Then she dragoons Mickey into driving her over to conspiracy theory guy's place, where they discover that he’s a pretty normal guy named Clive — even has a wife and kids. He tells Rose all sorts of things that we know to be true (or at least his perspective of these things), but naturally Rose doesn't believe him, and she bails at the first opportunity.

Meanwhile, Mickey has been eaten by a plastic wheelie bin, which spits out a plastic copy of him who, despite looking like a life-sized Ken doll, manages to fool Rose into believing he's the genuine article. The two drive to a pizza place, badly, where the fake Mickey is obsessed with the Doctor and keeps repeating the same words, babe, sugar, baby, sweetheart. The Doctor tracks them down and causes the fake Mickey to fall apart through the power of dodgy CGI and propwork (just because they have a bigger budget now doesn't mean the show's immune to laughably terrible effects; at this point it's part of the appeal). They escape into the TARDIS, which has both had a hell of a makeover and gotten a lot more cramped since we last saw it in 1996 (incidentally bringing it closer to the size it had throughout seasons 1-26; blame the lack of a movie-sized budget per episode). The Doctor tries to fly to the plastic people HQ but fails. He and Rose have a half-angry half-curious all-expository argument, among other things featuring the Doctor getting defensive about his Oop North accent. They discover that the base is under the London Eyenote a massive Ferris wheel, for those not in the know, go down there, and see the plastic controller, which the Doctor calls the Nestene Consciousness, who's gone from looking like dodgy tentacles in a box to being a blob of lava with a face. The real Mickey's there, freaking out. The Doctor tries to talk the Nestene out of it; except the Doctor has been involved in something big and terrible that he couldn't stop from destroying their nutrient planets, nor any other worlds that were destroyed in the conflict — which has made the Nestene extremely unwilling to trust him. The Nestene discovers the anti-plastic the Doctor has, goes crazy and activates all the plastic people (also known as the Autons, but they aren’t identified as such in this episode) in a repeat/homage to its debut appearance in 1970. Jackie, who's out shopping, is attacked by evil plastic robot brides. Clive, also out shopping, gets a moment to enjoy seeing his theories verified before the verification of his theories shoots him with its Arm Cannon.

Rose uses her bronze medal gymnastics skills to knock a plastic person into the Nestene, which also sprinkles it with the anti-plastic it took from the Doctor. It dies. The Autons give up and the Doctor, Rose and Mickey escape in the TARDIS as the base goes up in flames.

They arrive near home, where Mickey goes into pseudo-PTSD from being the Nestene's prisoner. The Doctor offers to take Rose on his travels across the universe. She declines. He vanishes. And apparently doesn't come back for a good century in his time (a playground for writers in the expanded universe of the series) before a pressing thought hits that he forgot to tell her something. Then he appears again and says, "Did I mention, it also travels in time?" That's right, a Columbo moment from across time and space.

Rose gives Mickey a kiss and this goodbye:

Rose: Thanks.
Mickey: Thanks for what?
Rose: Exactly.

And leaving her boyfriend in sadness and depression, she leaves to have happy-go-lucky adventures with Christopher Eccleston.