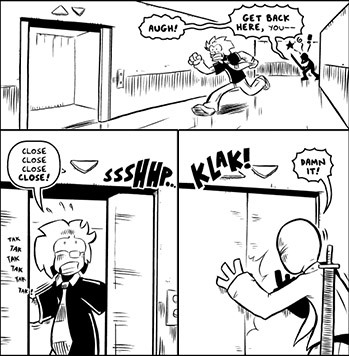 Elevators. We all know and love them. Those wonderful devices that let you reach the thirty-second floor without climbing ungodly numbers of stairs. Those wonderful moving rooms with lots of shiny buttons... including the "Close Door" button. Is Bob running from The Mafia? No problem! He just has to duck into a nearby elevator and hit that button, and the doors will miraculously slide closed just as the goons come running up to them, protecting Bob from their wrath!

Does not actually require the button being pushed to be the "Close Door" button, although it's common for a panicking character to push it repeatedly with a sense of urgency.

Occasionally, particularly when the pursuer is a killer robot, a horde of zombies, or other inhuman creature, the doors will close on their arms, forcing the hero to either push away or chop off the intruding limb(s) before their pursuer(s) manage to pry the door open. Never mind that a properly-working elevator should open automatically once it detects something in the way of the door. As Dogbert's Clues for the Clueless says (following advice about avoiding Uncomfortable Elevator Moments): "Don't try to crush people by pushing the 'Close' button. I've tried it and it doesn't work."

In comedy settings, expect the chased to calmly wait for the lift to arrive at its destination before resuming the panicked running once the doors open. Bonus points if the scene cuts between the chaser rushing downstairs with dramatic music playing and the chased listening to the calming elevator music.

A bit of Fridge Logic applies when you realize that elevator doors are not bulletproof, so a sufficiently armed member of The Mafia could probably shoot Bob even if the doors did close. Until, of course, the elevator starts actually moving out of the way (see also Concealment Equals Cover). Also, if your enemies happen to have grenades handy (not very common with most mafias but quite common with well-funded terrorists and certain cartels), one of them thrown into an elevator as the doors close or dropped into it from above can ruin your whole day.

Can lead to an Elevator Snare where the chaser tries to outrun the victim by using the stairs.

In Squidward's Monument, Lenny cannot follow you into the elevator, allowing it to be a quick escape if the player is being pursued.

In Squidward's Monument, Lenny cannot follow you into the elevator, allowing it to be a quick escape if the player is being pursued.