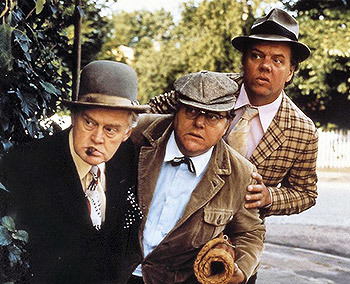 The original Danish incarnation of the gang. Left to right: Egon (Ove Sprogøe), Kjeld (Poul Bundgaard), and Benny (Morten Grunwald).
"How dare you!? Shut up!! I won't stand for it!! It is the same every time!! It is the same every single time!! I have a plan — a BRILLIANT plan — and then I am surrounded by dog-brains and dumbasses, lousy amateurs, pathetic nincompoops, ridiculous fart-flappers, talentless blockheads, impotent porridge-peasants, nursery teachers and Social Democrats!!"
— Egon Olsen
Advertisement:

Olsen-banden (English: The Olsen Gang) is a series of Danish crime comedy movies revolving around Egon Olsen and his gang and their (mostly unsuccessful) crimes. The series consists of 14 movies released between 1968 and 1998 (with a considerable gap between the last and second last films). Around the time of the fourth movie, Egon started to commit his burglaries using highly unusual plans, involving creative use of everyday items, as well as social engineering by playing on broad stereotypes. These plans would become the most defining and popular trait of the series. At the same time, a significant amount of social and political commentary was introduced. In a clear criticism of the capitalistic society, the number of Corrupt Corporate Executives, as well as impoverished and alcoholic characters, rose dramastically.

Norway and Sweden both made their own version of the series, with different approaches:

The series has a character page which goes into more detail on the central trio as well as other recurring characters in all versions of the series.

Not to be related to the Olsen Twins

. Or the Olsen Brothers