Film / Stargate: The Ark of Truth 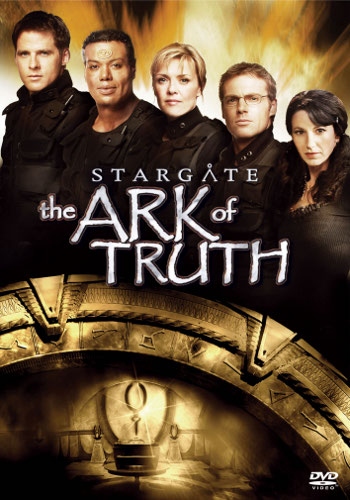 Warning: Spoilers for Stargate, Stargate SG-1 and this movie follow.

The Ark of Truth is a direct-to-DVD Finale Movie concluding the Ori arc of Stargate SG-1.

After Daniel Jackson receives visions of an artifact that can end the war with the Ori in one strike, SG-1 decide to travel to the Ori galaxy in the hope of locating the device before their ship is annihilated by the massed army of the Ori. The Ark needs to be used on just one Prior to instantly strip Adria (who succeeded the Ori killed by the Sangraal) of her power, and one was stupid enough to waltz straight into Stargate Command and let himself be captured. It's a simple plan, nothing can possibly go wrong, right?

Wrong! Thanks to IOA agent James Marrick, who almost dooms both galaxies by an untimely release of a Replicator on the Odyssey. That, as well as the fact that the one definite weakness of the replicators they had (Ancient-infused O'Neill's disruptive wave generator gun) was programmed out of its system.

But other than that everything's going exactly according to plan.

The movie was followed by a second SG-1 movie, Stargate: Continuum.

Alternative Title(s): The Ark Of Truth