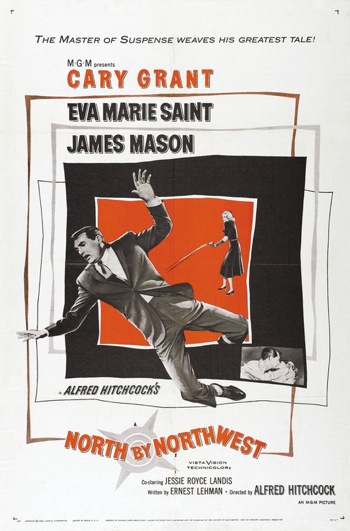 A classic 1959 thriller by Alfred Hitchcock, in which an innocent man mistaken for a spy is chased halfway across the USA by enemy spies searching for a MacGuffin. You may know it as "the one with the climax on Mount Rushmore". Or, better still, as "the one where Cary Grant gets chased by a crop duster", a scene which has often been homaged.

The film begins with New York advertising executive Roger O. Thornhill (Grant) getting abducted by enemy agents working for the master foreign spy Phillip Vandamm (James Mason), who is currently masquerading as the diplomat Lester Townsend. Vandamm believes Roger to be an American spy, George Kaplan, who has been tailing Vandamm. When Roger insists he is not the spy, Vandamm orders him killed. His henchmen, led by the sinister Leonard (Martin Landau), decide to stage a fatal accident by pouring a bottle of bourbon down Roger's throat and then placing him at the wheel of a stolen car on a cliffside road.

One car chase later, Roger escapes but is arrested for drunk driving. He takes the skeptical police and his equally skeptical mother (Jessie Royce Landis) to the Townsend mansion where he was abducted, only to find Vandamm gone and the housekeeper, another Vandamm associate, claiming Roger stole the car after getting drunk at a party there.

To clear his name, Roger attempts to find George Kaplan. Accompanied by his mother, he searches Kaplan's vacant room at the Plaza Hotel, where he discovers little other than that Kaplan is a shorter man than he and that seemingly none of the hotel staff have ever met the elusive spy in person. After narrowly escaping another encounter with Vandamm's henchmen, Roger goes to the United Nations, where the real Townsend is giving a speech. Roger, surprised to find that it wasn't Townsend who abducted him, is even more surprised when Townsend's corpse lands in his arms. Now Wrongly Accused of murder, Roger flees New York.

After a train journey to Chicago—during which Roger meets Femme Fatale Eve Kendall (Eva Marie Saint)—and another attempt on his life in the famous crop-duster attack, Roger eventually follows Eve to an art auction, where Vandamm is bidding on a statue. To escape the spy and his mooks, Roger disrupts the auction, deliberately getting himself arrested by the police.

The police are ordered to take Roger to the Professor (Leo G. Carroll), an American spymaster, who explains the plot. George Kaplan never existed; he was only a red herring, meant to divert the enemy from the real agent. While Roger's actions initially provided a useful inadvertent distraction, he has ended up raising Vandamm's suspicions towards the real spy, so the Professor proposes a complex charade to resolve the situation.

When this goes wrong, Roger and Eve end up being chased across Mount Rushmore by Leonard and Vandamm's other henchmen.

One of Hitchcock's most popular films, North by Northwest was a major stylistic influence on The Man from U.N.C.L.E.: in fact, Leo G. Carroll, who played Alexander Waverly in that series, plays a very similar character (sobriquetted "The Professor") in the film, and the TV show drew its "innocent gets caught up in international intrigue" shtick from the film. It has also sometimes been called the first James Bond film.

At 2 hours and 16 minutes, it's Hitchcock's longest film (other than the special extended DVD cut of Topaz).