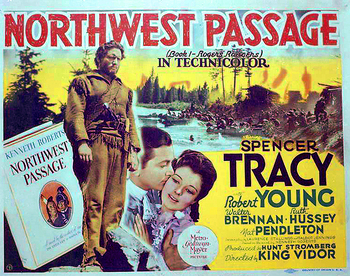 The year is 1759. Langdon Towne (Robert Young), an aspiring artist, is kicked out of Harvard Law School for doing an offensive cartoon of the King's attorney, Wiseman Claggett. After ranting about Claggett in the tavern, not knowing that Claggett is in the next room, he gets into trouble with the attorney and goes on the run with his friend Hunk Marriner (Walter Brennan). Eventually, they come to a tavern where they meet Captain Robert Rogers (a green-clad Spencer Tracy) who gang-presses them into joining Rogers' Rangers, fighting in the French and Indian War and destroying the Abenakis tribe, after he learns that Towne is an excellent cartographer and knows about the elusive "Northwest Passage".

The film is infamous for perpetuating The Savage Indian stereotype. This isn't helped by the fact that the real Rogers was an Unreliable Narrator, for publishing biased accounts of his raid on the Abenakis.