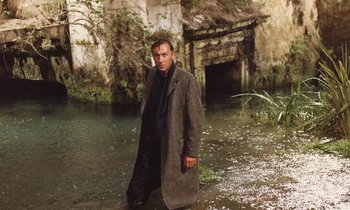 Nostalghia is a 1983 film from Italy directed by Andrei Tarkovsky.

Andrei, a Russian writer, is in Italy researching the life of 18th century (fictional) Russian composer Pavel Sosnovsky, who spent time in Northern Italy before returning to Russia and accepting life as a serf—before he killed himself, that is. Accompanied by Eugenia, a good-looking interpreter (even though his Italian is pretty good), Andrei makes his way to the village of Bagno Vignoni in Tuscany, famous for its hot spring mineral pool, where Sosnovsky stayed.

He seems to be not all that interested in his research, however. He gets distracted by one Domenico, a sort of "holy fool" written off as insane by all the townsfolk. It seems that some time ago, Domenico held his whole family prisoner in their home for seven years while he awaited the end of the world. The world didn't end, eventually Domenico's family escaped. Now he lives alone in the crumbling, leaking ruin of his home, talking about the end of the world. He gives Andrei a candle, and a task to save the world: carry the candle across the mineral pool, while keeping it lit.

Tarkovsky's first film outside of Russia and the next-to-last film he made before his death from cancer.