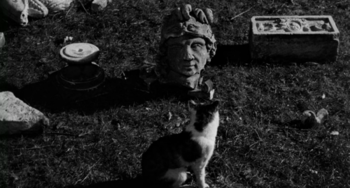 La notte is a 1961 film by Michelangelo Antonioni.

It features Marcello Mastroianni as Giovanni Pantano, a famous writer, and Jeanne Moreau as his wife Lidia. It is a portrait of a failing marriage and people who have grown apart from each other, seen over a single day as the Pantanos go out and about, visiting a terminally ill friend, going to a fancy party. While the inattentive Giovanni enjoys his high-society lifestyle and looks for a younger woman to have an affair with, the much more sensitive Lidia is undergoing an emotional crisis.

Monica Vitti stars as Valentina Gherardini, the daughter of Giovanni's potential boss. Giovanni and Lidia's friend, the one dying of cancer, is played by Bernhard Wicki, who also directed The Bridge. The film is set in Milan. La Notte is the second installment in the trilogy of alienation succeeding to L'Avventura and preceeding L'eclisse.

La notte was shot by the cinematographer Gianni di Venanzo. The film received a Golden Bear in Berlin Film Festival in 1961.