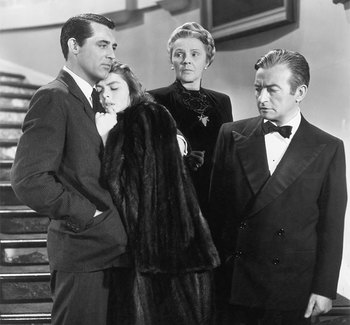 "A man doesn't tell a woman what to do. She tells herself."
— T. R. Devlin
Advertisement:

Shortly after the end of World War II, Alicia Huberman (Bergman), the American daughter of a convicted Nazi spy, is recruited by government agent T. R. Devlin (Grant) for an important assignment. A few Nazis, led by one Alexander Sebastian (Rains), have relocated to Brazil for an evil plan. Her mission, should she choose to accept it, is to infiltrate the group and find out their goal. She infiltrates the group, and eventually marries Sebastian, over his mother's objections. How long can Alicia uphold her charade? Can Devlin save the day if her cover's blown?