Film / Nothing But a Man 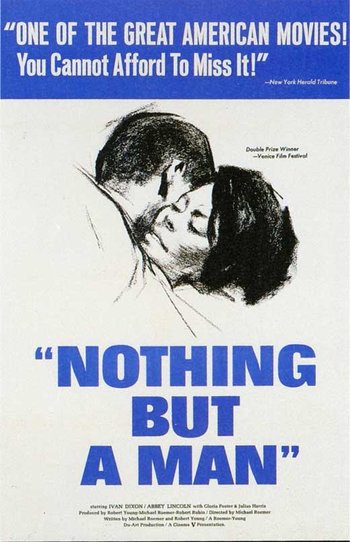 Nothing But a Man is a 1964 independent drama film directed by Michael Roemer.

Duff Anderson (Ivan Dixon) is a black man who works on a railroad "section gang" (a mobile group of workers that repair tracks) in the Jim Crow south. One night he splits off from his buddies, who are drinking in a pool hall, and instead goes walking downtown. He finds his way into a church service. After enjoying the Gospel Revival Number, he attends the post-service social, and meets lovely Josie Dawson (Abbey Lincoln), the preacher's daughter. Rev. Dawson (Stanley Green), who is about as upper-class as a black man can get in 1964 Alabama, disapproves of his daughter dating a common laborer. But soon enough Josie and Duff get married.

Getting married means Duff has to leave the life of an itinerant railroad worker behind, and he takes a lower-paying job at a sawmill. Duff is a proud man, unwilling to bow and scrape to the white man in the way that blacks were expected to in the Deep South. His pride and self-respect wind up getting him fired from the sawmill, and blacklisted at other sawmills. Duff soon discovers how difficult life can be in Alabama for a black man who insists on being treated with respect.

Yaphet Kotto made his film debut as Jocko, one of Duff's buddies on the railroad gang.