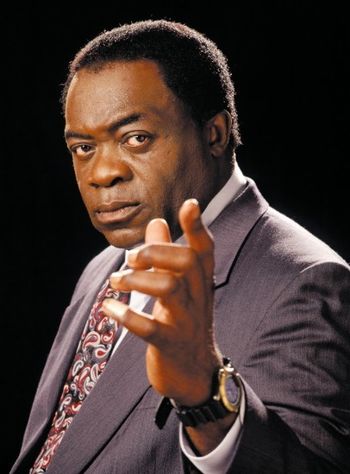 Names is for tombstones, baby.
"I was roaming around Manhattan looking for work; in fact I had just come from an employment center in New York called 'Warren Street' where you can buy a part-time job for about ten bucks. On this particular day I didn't feel like delivering lunches, or pushing a dolly truck through lower Manhattan, so I went up to 42nd Street around Times Square, which at the time looked like a circus: porn theaters on one side of the street and b-movies on the other. I stopped before one particular theater and there were gangster photos all over the marquee. The movie must have cost about seventy-five cents, so I went in and sat down and saw On the Waterfront. I was so blown away after that day — it was Brando's performance that made me leave the streets to become an actor."
— On when he decided to become an actor
Advertisement:

He was well known for having broken down a number of Hollywood stereotypes about black characters. He is recognized by most audiences as a character actor who regularly commands the scenes he's in for his powerful performances. He was known to regularly turn down roles which are badly written stereotypically "black" parts, although he would on occasion have to do a film just to put food on the table. His breakout film was Nothing But a Man, which is now regarded as a classic.

He played the Big Bad in the James Bond film Live and Let Die,note A role which was originally stereotypically written (as most of the black roles in the film were) and which he managed to blow out of the water with his serious and human performance. Parker in Alien and Lieutenant Giardello in Homicide: Life on the Street.note In fact he has played a police chief so often, (and so well) throughout his career that he was named an honorary Police Captain at Frederick PD He also turned down the role of Picard in Star Trek: The Next Generation and Lando in Star Wars,note For a time George Lucas was also considering him for the role of Han Solo. which he now regards as a mistake.

He arguably kickstarted Blaxploitation cinema with his role as a killer in The Liberation of L. B. Jones, where he is shown onscreen killing a white character (which had not been seen previously in American cinema). Other blaxploitation films he appeared in are The Limit (1972)note Which he wrote, starred and directed because he wasn't getting the kind of roles he wanted to play. and Truck Turner (1974).note (Talking on the latter film) "He [Isaac Hayes] watched me do the death scene and that's all he talked about afterwards: "Man, you all see the way my man Yaphet did his death scene?" I can't take too much credit for that scene, I had seen it in The Young Lions with Marlon Brando and that gave me a skeleton to work from.

He was of Cameroonian descent on his father's side (the latter emigrated to the USA in the 1920s), and in fact he comes from a direct male-lineage of the Cameroon royalty (as described in his autobiography Royalty). Further, he claimed in his book that he was also a direct descendant of Queen Victoria. He was a practicing Jew, and spoke about experiencing both racism and antisemitism while growing up in The Bronx.

His latest work was providing the voice for Parker in Alien: Isolation. He was also a member of the Academy.

Works he appeared in with pages on TV Tropes: