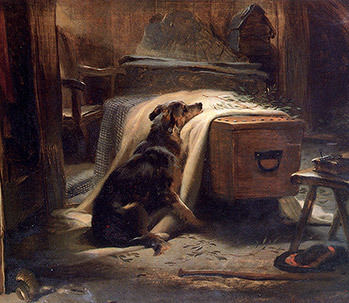 "The Old Shepherd's Chief Mourner"
"Eleanor Rigby died in a church
And was buried along with her name
Nobody came..."
— The Beatles, "Eleanor Rigby"
Advertisement:

So, you have this character that's important to the story. Maybe a Tragic Hero, or a family member or friend, The Rival, or a major antagonist. They're Killed Off for Real, and there's a funeral. With three people attending. For added pathos, it may be raining. Seems only the True Companions and possibly Worthy Opponent care enough to be there.

This can be used to show how the person had pushed everyone away until he was Hated by All, or how trivial and shallow his life was, or how fair-weather his so-called-friends were, or how his reputation lasted after death, or What You Are in the Dark resulted in his death with no one knowing the truth.

Distinct from And There Was Much Rejoicing in that the reaction needn't be positive, only largely indifferent except for a select few, and usually Played for Drama instead of laughs. Often goes with Downer Beginning.

If the person has no time for a formal funeral, it is not an example of this; they may substitute To Absent Friends or other forms of Due to the Dead, such as visiting the grave.