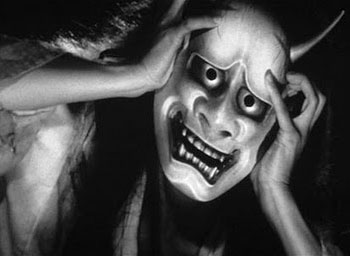 Yeah, I wouldn't have put that on.
"People are both the devil and god—and are truly mysterious"
—Writer/Director Kaneto Shindo
Advertisement:

Onibaba (鬼婆) AKA Demon Hag is a Japanese Psychological Horror samurai film from 1964, written and directed by Kaneto Shindo. It is based on an old Buddhist Fable, but the film is notable for its uncompromising modern vision, including frank depictions of sexuality and ruthless female power, fast cuts, slow motion, unusual angles, and a frantic soundtrack mixing natural sounds and traditional drumming.

It was filmed in a field of high susuki grass, meaning that neither the characters or the camera were able to see more than a few feet, which helped to create a claustrophobic, entrapping effect. The action takes place during one of the many bloody wars of Japan's feudal period, but centers around a small group of poor fishing villagers who must eke out an existence on the outskirts of the brutal war, highlighting the social conflict between the ruling samurai and the poor farmers on whom they built their empires.

An older woman and a young woman await the return of Kichi, respectively the older's son and younger's husband, who was taken away to fight in the war. The two women have been surviving by murdering wandering soldiers and giving their armor to a secondhand dealer. The man's friend and fellow soldier, Hachi, returns and tells the two women that Kichi was killed on the way back. Eventually the younger woman and Hachi embark on an affair, which the older woman doesn't like at all, leading to dark consequences.

The iconic mask inspired the design of the demon in The Exorcist. Also, the film is named after creatures in Japanese folklore, which you can find here