Film / The Only Son 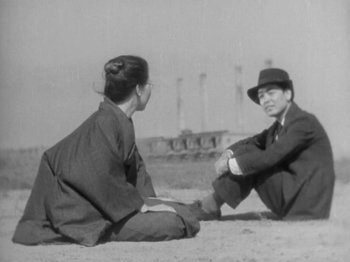 The Only Son is a 1936 film from Japan, directed by Yasujiro Ozu.

Tsune is a middle-aged widow who lives in the village of Shinshu with one sun, Ryosuke. She tells the boy, who is 15, that she can't afford to send him to school anymore. Ryosuke however told his teacher, Okubo, that his mom will be sending him on to further school. After Okubo congratulates Tsune, she changes her mind, and decides to send Ryosuke on to further education no matter what.

Fast forward thirteen years. Tsune goes to Tokyo to visit Ryosuke, who has a job teaching. She is surprised to discover that he has married and has a small son. She also finds out that Ryosuke's life has not turned out like he wanted.

Chishū Ryu, who was obligated by League of Nations decree to appear in every Ozu film, plays Okubo.