Film / Only Angels Have Wings 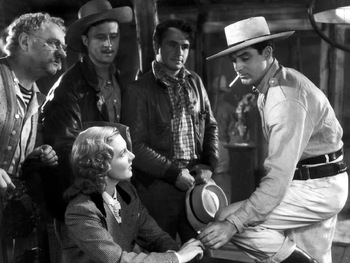 Only Angels Have Wings is a 1939 adventure drama directed by Howard Hawks, starring Cary Grant and Jean Arthur.

Geoff Carter (Grant) is the boss of a rinky-dink airline, based in the fictional South American port town of Barranca, that routinely carries mail and supplies through the Andes mountain passes into the interior. The work is highly hazardous, as Geoff and his fellow pilots have to take rickety propeller planes over 14,000-foot Andes Mountains passes that are routinely plagued with fog and bad weather. When a pilot dies early in the film, he's said to be the third fatality the airline has suffered in three months. When pilots aren't dying, Geoff and his fellow fliers are worried about a government mail contract that they desperately need in order to stay in business.

Romantic entanglements ensue when a pretty blonde nightclub entertainer, Bonnie Lee (Arthur), arrives in town, takes a liking to Geoff, and decides to stay. Meanwhile, the latest pilot death forces Geoff to hire as a new pilot one Bat MacPherson, who has a bad reputation. It seems that Bat once parachuted out of a crippled plane with the only parachute and left his copilot aboard to die. Geoff is surprised to find out that Bat's wife just happens to be his ex-fiancee, Judy.

Only Angels Have Wings boasted an impressive cast. Thomas Mitchell co-stars as Kid, Geoff's friend and fellow pilot—it was Kid's brother who died in the plane that Bat jumped out of. Bat is played by Richard Barthelmess, a star going back 20 years all the way to Broken Blossoms (1919). It was one of Barthelmess's last film roles. Bat's wife Judy is played by a young Rita Hayworth, in one of her first starring roles.

Only Angels Have Tropes: