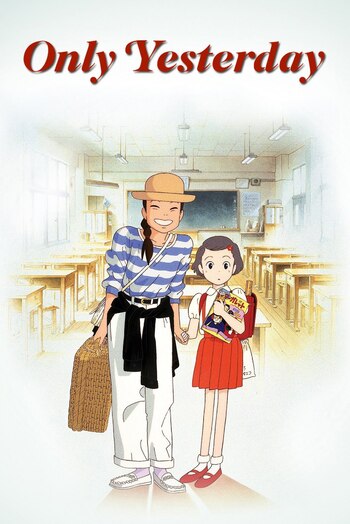 It's 1982 and 27-year-old unmarried Taeko Okajima works as an office lady in Tokyo. She decides to spend her summer holiday at her brother-in-law's farm in the countryside to help out with the safflower harvest, since she liked going there the year before. She sees it as a great way to get a break from the city life for a while.

During her trip she gets overcome with memories of when she was 10 years old and in fifth grade. In a series of flashbacks, imaginatively interwoven with her current life, a picture forms of her youth, filled with math problems, friends, boys and the typical throes of a girl growing up. It results in her wondering whether she is being true to her own nature in life, since she has wanted to live in the country since she was a little girl.

Only Yesterday, Japanese title Omoide Poro Poro, was released in 1991 and not only is it the first Ghibli film to be released after the Cold War, but is also an atypical Studio Ghibli product in that it lacks the fantastic plot devices that permeate most of the studio's work. It was directed by Isao Takahata and produced by Hayao Miyazaki. The result features lots of lovely scenery, intriguing, believable characters and wonderful, fluid animation.

After 25 years, an English dub of the film was finally released in 2016 by GKIDS, featuring the voices of Daisy Ridley, Dev Patel and Ashley Eckstein.

Only Yesterday provides examples of: