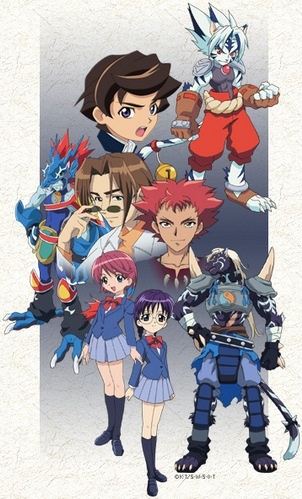 "Those who made contracts with the Shikigami and set forth into battle... Were called Toujinshi."
Advertisement:

Onmyou Taisenki (The Chronicles of the Great Yin-Yang War) is a 52 episode anime series from 2004, directed by Masakazu Hishida and produced by Studio Sunrise. It is loosely based on the manga series of the same name, set years in the future with new protagonists.

The story follows Riku Tachibana, a shy and kindhearted 12 year old boy who lives in a shrine with his adoptive grandfather. Riku has few friends and has often been bullied due to making strange hand gestures during class, that his grandfather taught him.

Riku makes friends with a mysterious boy, and is convinced to let him visit the shrine after school. After the boy is blocked from entering by a magic barrier, he attacks Riku's grandfather using a device called a "Drive" to summon "Shikigami" or ritual gods which make contracts with humans to fight with them.

Attempting to protect his grandfather, Riku picks up the Drive located in the shrine with them and makes a contract with Kogenta, a white tiger with a hot-blooded passion for fighting. Now that he has made a contract, Riku is a Toujinshi, and is swept up in a war between the Heaven and Earth Toujinshi.