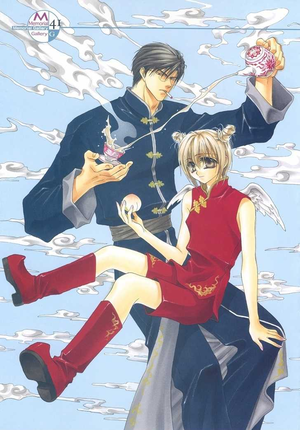 Okane ga Nai (No Money!) is a yaoi manga series created by Hitoyo Shinozaki and illustrated by Tohru Kousaka. Originally a series of Light Novels, the manga ran in the josei magazine Comic Magazine LYNX from 2002 to 2014.

Ayase, an 18-year old student, is overly naïve and trusting; as the story opens, he is being sold at auction by his unscrupulous cousin to pay off gambling debts. He's eventually bought by Kanou, a towering, ruthless loanshark who is doing so to repay Ayase for a past kindness...which Ayase unfortunately has no memory of. Although Kanou is clearly in love, he has issues expressing his feelings; worse, neither is willing to admit an attraction to men, and Kanou further insists that Ayase is the only man he's attracted to. In an attempt to keep Ayase around, Kanou claims that the amount he paid for Ayase amounts to a debt he's willing to null if Ayase remembers how they met. Until then, Ayase can repay Kanou by having sex with him: he gets 500,000 yen every time they do the deed to pay off the 120 million yen debt.note  The number of times needed for 120 million is 240 at the very least as the debt goes up by 10% every ten days, if you're wondering.

The traditional Seme and Uke dynamic featured is subverted by the fact that Kanou is head over heels for Ayase, while Ayase is unsure of how he feels for Kanou and averse to being forced into a homosexual relationship, occasionally giving him the upper hand. The relationship drama is also helped along by a colourful cast of secondary characters, including Toranosuke Gion, an upbeat and clever Mr. Fixit who often helps Kanou in his schemes, Kaoruko Someya, a well-meaning but abrasive transvestite who acts as the couple's counsellor, and the Kuba twins, Kanou's sidekicks and battle butlers.

It should be noted that this series is very graphic in its depictions of sex and violence. Both are played for laughs as well as angst.

Unusually for a yaoi series, the manga is long-running, still going on at 16 volumes. Also, the writer is male, despite the yaoi genre as a whole being created by women for women. It often translates to a certain harshness in the protagonists' relationship that is usually not as present in other yaoi series.

A 4-episode OVA has been made, as well as multiple drama CDs.

There is a character sheet available for the character-specific tropes.