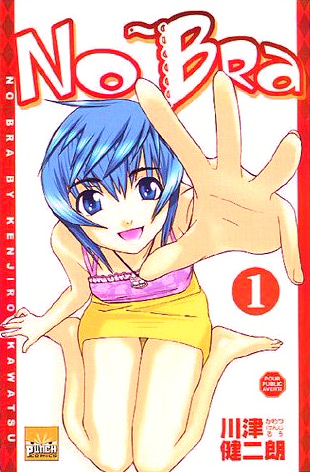 No Bra is a teenage romance manga written and illustrated by Kenjiro Kawatsu that was serialized in Monthly Shōnen Champion from 2002 to 2004.

It tells the story of Masato Katoka, a somewhat dimwitted high school student, whose childhood friend Yuki Nomura moves in with him one day. Because of Yuki's cute face, girlish clothing, and apparently feminine features, Masato is extremely happy with his new life — until Yuki's mother calls Masato, and tells him that Yuki previously lived as a boy. The story revolves around Masato's relationship with Yuki and his slowly disintegrating reluctance to develop romantic feelings for him. Complicating things further is the growing attraction between Masato and his female classmate Kaoru Oozora, along with interference from his friend Hideki, the conniving freeloader (and teacher) Mizutani, and Yuki's mischievous cousin Mizuki.

Not to be confused with Vapor Wear. Contrast Prunus Girl and The Secret Devil-chan, which explore similar themes.

No Bra provides examples of: