-Get ready for another class in adventure... unraveling history's mysteries!
—Professor Noah 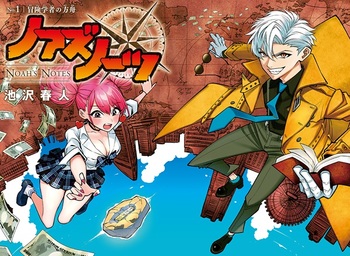 Carefree gal Mirai Kotobuki has a clear goal in life: to get married, have kids and generally lead an easy-going, domestic existence. And she definitely doesn't need studying for that, no siree. Especially not history. History is boring, useless and has no influence on what's happening to her now.

Or that's what she thinks, at least.

After she finds a weird rock with a strange metal object embedded into it at a construction site, her life is turned upside down by a manic-looking, sunglasses-wearing man who makes the most Dynamic Entry possible by crashing a helicopter into Mirai's school. This man is Professor Noah Minami Umberbach, a slightly-unhinged archaeologist working for the enigmatic Scholar Society to collect the Notes, archaeological artifacts from the future, of which Mirai's weird rock is one.

Thus begins Noah's Notes (ノアズノーツ), a shounen/mystery manga written and illustrated by Haruto Ikezawa, pubilshed between March and August 2018 in Weekly Shonen Jump. Noah soon pulls Mirai along on a crazy adventure, recruiting her as his "student" on an unusual history class: a world-spanning quest to find all the Notes and unravel a dark mystery hidden in the annals of history. Soon it becomes evident that the stakes are high: the Notes may be somehow connected to the upcoming destruction of humanity, and a mysterious secret society is moving behind the scenes to get their hands on the Notes for their own sinister purposes.