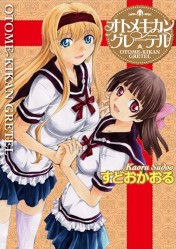 Yuu Mikoshima enters the famous St. Millefeuille All-Girl High School with high expectations of it... and finds much more than she was prepared for. First off, Nagi, a cheerful classmate assigned to show her the school, attempts (admittedly) to seduce her, culminating in a French kiss. Next thing she knows, the school is being attacked by a three-ton monster that is after its stockpile of sugar. Somehow, Yuu is able to unleash a devastating power attack and knock it out and ends up kissing an angry girl named Mariya to combine their powers and kill the monster for good.

It turns out, St. Millefeuille is a special academy for training Magitek witches who can fight Formiks, monsters like the one Yuu defeated. Said monsters destroyed 80% of the world's sugar supply some 10 years ago and are still out for the rest. To fight them, each St. Millefeuille student has a special power and Yuu's is to absorb the powers of others through kissing, just like she did with Nagi and Mariya, with whom she eventually gets teamed up. Thus, her ordinary school life begins.

Otome Kikan Gretel is a Girls' Love manga by Kaoru Sudou, that was serialized in the Seinen magazine Comic Yuri Hime S from 2007 to 2008. It never officially concluded, as the author experienced serious health problems in 2009, retiring from the industry for over five years, during which the series had been apparently quietly canceled by the publisher.