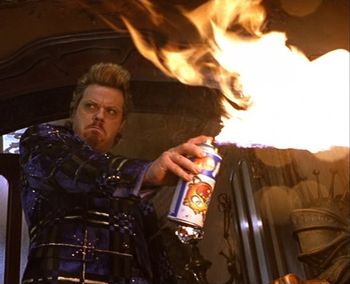 "You can't hurt me, Baby Bowler. 'Cause I'm protected. By the God of Haircare."
— Tony P, Mystery Men
Advertisement:

Using an aerosol can, such as hairspray, with a match or lighter as a makeshift flamethrower. A serious case of Don't Try This at Home, because there's a very real risk that the flames will heat the canister up enough for it to rupture and explode. You can accidentally poison yourself if you keep doing it, thanks to the fumes. Also, it smells terrible. See also Farts on Fire for a smaller, more comedic version of this.

Interestingly but for probably obvious reasons, the BBFC (the British censorship board) doesn't allow this trope to be shown in films or home video rated below "18", as they are pretty strict in banning what they deem is "imitable" and likely to cause injury and/or death if some dumb kid decided to copy an obviously dangerous action in a movie or TV show.

Subtrope of Improvised Weapon. Supertrope is Homemade Flamethrower. See also Booze Flamethrower, Molotov Cocktail, and Arrows on Fire. If a gas canister itself becomes a weapon, that's a Gas-Cylinder Rocket.