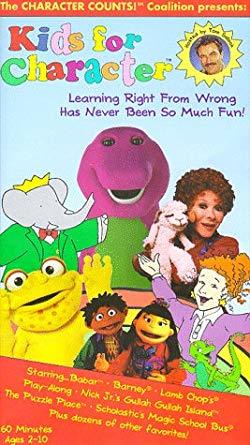 ''Learning right from wrong
There's more to growing up than growing very tall
Growing strong is very good, but that isn't all!
It's what's inside your head, I'm happy to announce,
That makes you good to be with. It's your character that counts!
— "It's Your Character That Counts," intro song
Advertisement:

Kids for Character is a Direct to Video Public Service Announcement released by Lyrick Studios in 1996, in partnership with the Josephson Institute of Ethics and their Character Counts! Coalition program. Hosted by Tom Selleck, the video teaches the virtues of having good character with the help of favorite children's characters ranging from Barney and Binyah Binyah to Lamb Chop and Ms. Frizzle.

A sequel was released in 1997 entitled "Choices Count," focusing instead on making good choices, consequences, and listening to one's conscience. This time, Wishbone, The Big Comfy Couch, and Bananas in Pyjamas are the featured shows, along with singers Joe Scruggs and Eddie Coker.

Both videos were filmed at Universal Studios Florida.

The Kids For Character videos contain examples of:

The future is ours, we are Kids for Character